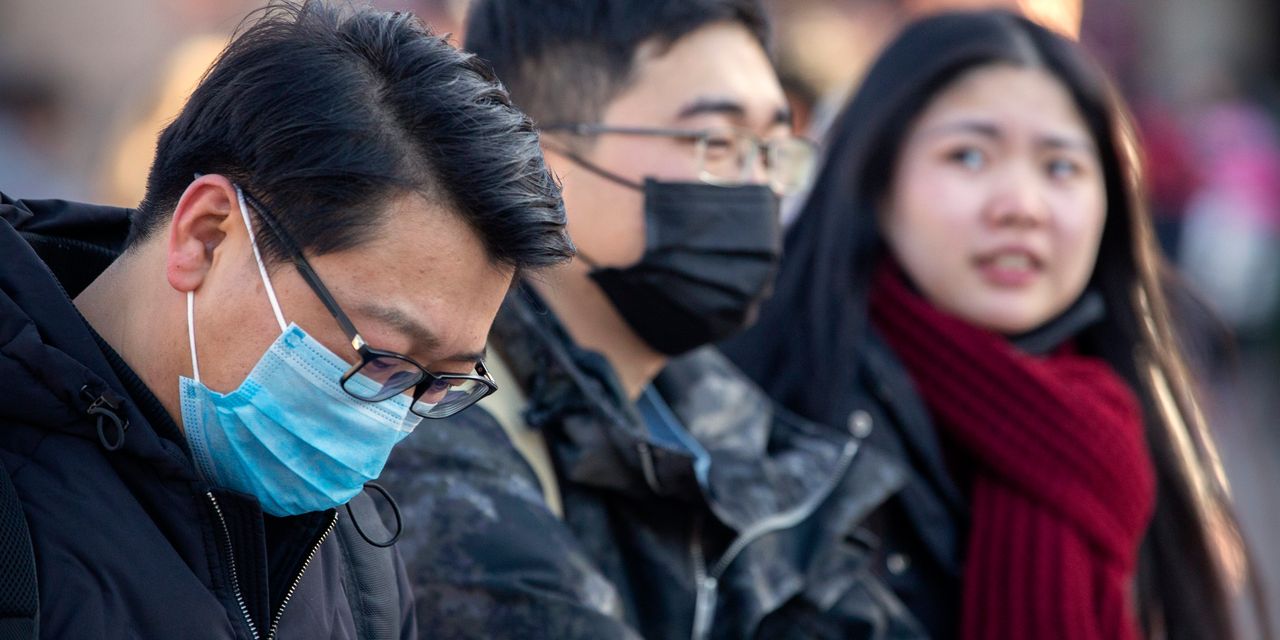 The movement of hundreds of millions of people across China and outside the country each year during the Spring Festival – either to visit families or, increasingly, to take vacations – is commonly described. as the world’s largest annual human migration.

But some say they are reconsidering their plans amid growing concerns and wide national media coverage of the coronavirus outbreak, which is one of a class of pathogens that cause a range of respiratory illnesses.

As the virus spreads nationwide, travelers worry about unwanted exposure as they roam the country on crowded trains and planes. There has been human-to-human transmission of the virus, one of China’s best-known epidemiological experts told a state-owned television station on Monday.

Before the outbreak, China’s largest travel platform, Ctrip.com, a unit of the Trip.com group Ltd.

, estimated that the Chinese would make about 450 million trips to China for the Lunar New Year between Jan. 24 and Jan. 30, an 8.4 percent increase from last year.

But as economic growth slows in China, out-of-country travel slowed last year and will continue to slow, a UBS Securities survey of Chinese travelers found in October.

While Chinese authorities are not urging travelers to stay at home because of the virus, the Shanghai Municipal Center for Disease Control and Prevention issued a statement on Monday warning potentially vulnerable people to avoid crowded public places and wear a face shield to reduce their risk of exposure.

The virus originated in Wuhan, a large city in central China, but authorities on Monday reported new confirmed and suspected cases in Beijing in the north, Shanghai in the east and in the southern province of Guangdong, which borders China. Hong Kong.

As of Monday, 218 cases had been confirmed and three people had been killed by the virus, according to Chinese state media and health officials.

Lynn Lin, a 34-year-old healthcare worker based in southern China, said she planned to spend the long vacation in Beijing with her husband and 5-year-old son. But she canceled the trip at the last moment after learning that cases of the virus had reached the capital.

“I cannot risk the safety of my whole family, especially the child,” Ms. Lin said.

Ms. Lin said that she and her husband booked their tickets almost two months ago at a cost of 10,000 yuan ($ 1,456) and could not get a refund. They also had to give up an additional 1,200 yuan in hotel deposits.

She recalled her experience when the deadly Severe Acute Respiratory Syndrome, or SARS, swept through China in late 2002 and early 2003. This viral respiratory disease, which was caused by another strain of coronavirus, spread. worldwide in a matter of months and overlapped with the Spring Festival travel season, ultimately killing around 800 people, mostly in mainland China and Hong Kong.

“I am concerned that this is another SARS, although it is not as serious and deadly as SARS so far,” Ms. Lin said.

Beyond China’s borders, the coronavirus has infected travelers in Japan, South Korea and Thailand, three of the most popular destinations for Lunar New Year travelers. All had recently traveled through Wuhan. Airports in neighboring countries were expanding body temperature monitoring of arrivals.

Travel destinations around the world are increasingly dependent on Chinese tourism dollars, especially during the Lunar New Year. China’s domestic economy also relies on the millions of Chinese who return to their hometowns or spend their annual vacations traveling to national tourist spots.

How to promote travel safety in the face of a public health problem? Join the conversation below.

Zhou Yongxiang, a 29-year-old director of a Guangdong-based toy company, said he planned to spend 10 to 12 days with his wife in Italy, France and Germany during the Lunar New Year holidays. , but canceled this month. His factory has come under increased economic pressure over the past year, he said, and the yuan has weakened against the euro, making his trip to Europe more expensive.

“We don’t want to spend 40,000 to 50,000 yuan just to throw ourselves into a crowd of tourists, five or six meters from the little Mona Lisa and see nothing. It’s just a waste of money, ”he said.

—Raffaele Huang contributed to this article.